"What is this thing?"

It's an app (well, technically a bunch of apps) that you can use to stage an immersive theatre show online.

No. Promenade and Zoom both operate around the core idea of "people in little boxes", but Promenade is built to be themed and customized, and has a number of features centered around staging and performing a show that Zoom will likely never add.

"Good, I've been waiting for something like this since my April 2020 production of Glengarry Glen Ross got cancelled."

Well, bear in mind the "Immersive Interactive" part. Promenade isn't going to work well for traditional theatre shows, it's built for nonlinear immersive shows that have a lot of interactivity.

"What are you talking about?"

If you're unfamiliar, immersive theatre is a genre of theatre that's very nonlinear: often audiences are let loose in a space with an ability to interact with characters and influence how the story unfolds.

"Why did you make this?"

In March 2020, as the Covid-19 pandemic was reaching America and theatre productions were being cancelled, a group of us met up to discuss how we could keep doing theatre online. We knew that if we simply filmed theatre and streamed it to people, we'd be competing for people's attention alongside online TV and film, and try as we might, we're not going to be able to match the filmmaking craft or production values of The Mandalorian.

We knew that if we wanted theatre to exist as a separate thing from film, it had to do what film can't do, it had to be live. And we knew that it probably wouldn't be enough to simply livestream theatre productions, since a non-interactive livestreamed video is basically indistinguishable from film. We needed the audience to have no doubt in their minds that our theatre was live. We needed it to be undeniably live.

So we built a fully-devised online interactive immersive show called Shattered Space, and a platform to host it that combined 3D graphics and video conferencing infrastructure. And it worked! We've now run two successful five-weekend shows on this platform, and so now we want to make it available to as many people as possible.

A demo of the navigation screen from Shattered Space

"Alright cool, now how do I make money with this?"

Promenade can sync lists of attendess from Eventbrite, or you can manually add attendees who have bought tickets some other way. When it's time to start the show, you can export a CSV with a list of all the current attendees and their login links, then use a mail merge app of your choice to send them out. If you want us to integrate with something that isn't Eventbrite, let us know and if other people want it too we may add it.

If you play your cards right, less than a hundred bucks for a month of shows. All of Promenade's servers can run on really cheap servers.

Nothing, as long as you've got someone who can set this up. Promenade is open source (MIT License) and there's no cost for using it or building on top of it. If you need help setting it up, contact me (Chris Uehlinger, The Scattered Players Lead Engineer) and I'll help you out (although if you require more help than just the initial setup, I will request a stipend for my work).

"What kind of shows work well with Promenade?"

As mentioned before, immersive shows, but Promenade is also a little opinionated about format and structure. It works best with shows that are set in a physical space that could be shown as a video game map screen. So like: A show set in the Old West, where one character is in the General Store, another is a bartender at the Salloon, and another is the Sheriff at the Sheriff's office. Out first show was set in outer space, with each character living on a different planet.

"Can the audience members travel the world on their own, or do they have to move in groups?"

Groups. With that said, you could just have a lot of one-person groups, although that would probably mean having less audience members per show, because...

"Can more than one group visit a character at once?"

No. But please let us know if that's keeping you from using Promenade, because if we hear about enough demand for this use case, we may look into building a separate platform to support it.

"We usually give a speech at the beginning of our show, introducing the audience to the world and explaining a few rules. How can I do that?"

Shows in Promenade start with a Preshow screen, where attendees can get to meet one another and read your show's program. After that your Stage Manager can turn on an Intro video, which is shown to all attendees. Following that, your Stage Manager can switch the show into Freeplay mode, where the audience is free to move about.

"How do I work this thing?"

You'll be using the Admin App a lot. It lets you add new users, see which actors and audience members have logged in, and gives you the ability to control which phase of the show you're currently in and even send audio or visual cues if those have been set up.

"How do I communicate with actors in the show?" 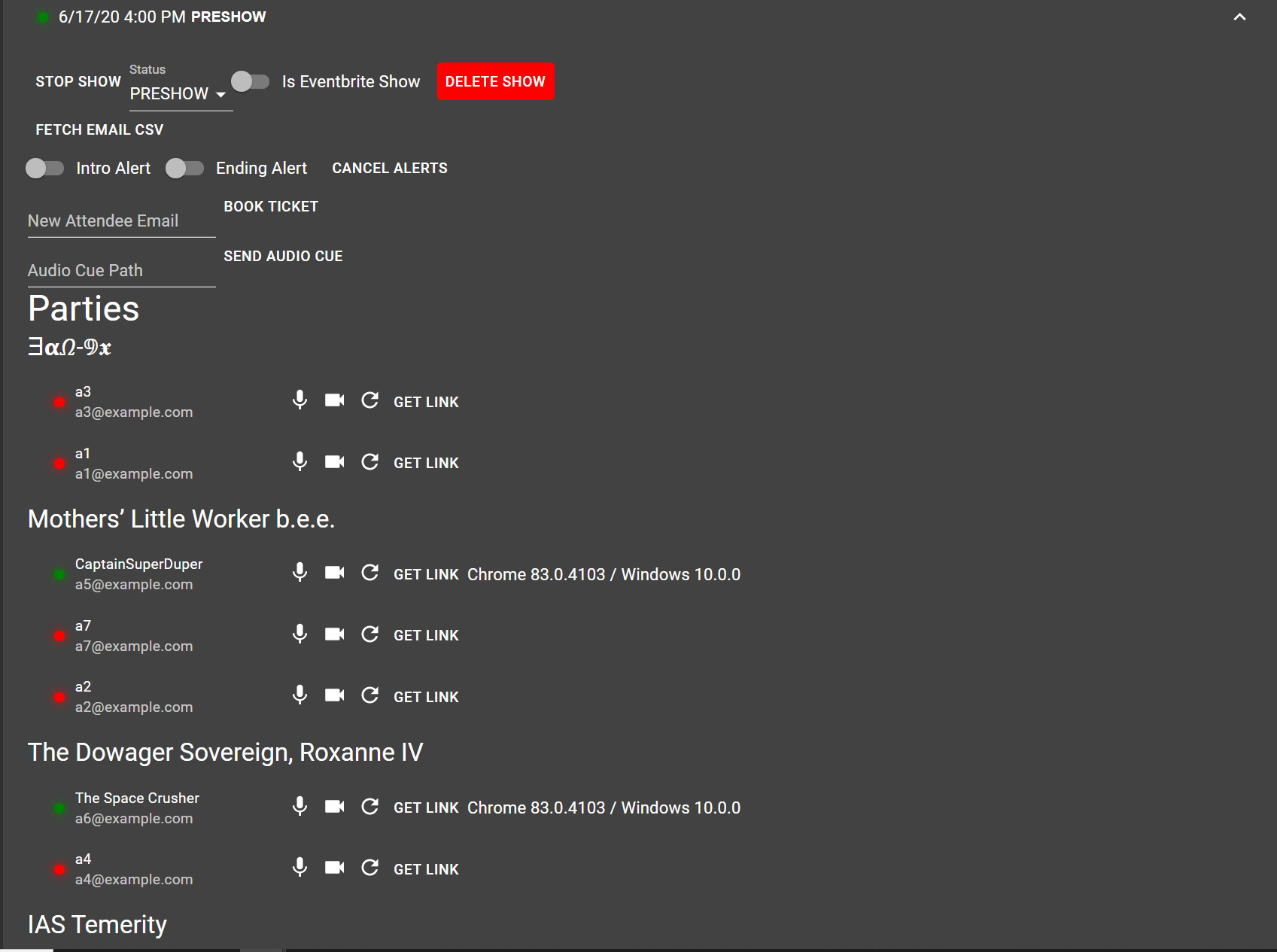 Your Stage Manager (or someone else with access to the Admin App) will send you a link that will let you log in.

"What browsers are supported?"

Chrome works best, Firefox and the new Microsoft Edge work sometimes. If you're on iOS, you *must* use Safari, and any other browser won't work at all.

"My laptop has seen better days and I want to do a scene where I have some mobility, can I use my phone?"

"Yikes, so I have to go back and forth between all these tabs? This mobile version feels hard to use."

If you've still got that laptop, you can open the Actor App in "headless mode". This way, you can use your phone (and it's camera) for performing, but also use your laptop to type in the chat and see all the info about the group you're talking to. Just ask your Stage Manager for a login link, put &headless=true on the end of it, and then visit that link on your laptop (but not your phone).

A demo of the mobile actor app

For Theatre Techs (who are or aren't programmers by trade)

"My director/producer just asked me to set this up, how do I work this thing?"

Go look at this Git repo and read the instructions. If you're having trouble, shoot me an email, and I may be able to help you.

"What am I gonna have to do to make this thing work?"

Once everything in that README is set up, you'll need to run the ./start-show.sh script about an hour or two before curtain to start up the servers, and then run ./sleep-mode.sh after the evening of shows ends to shut them down. The servers only take about 5 minutes to start up, but there's some domain name stuff that can take an hour or so to sort itself out due to ISPs.

An interaction with a character is interrupted by an audio/visual cue that takes the story in a new direction. Visual cues can be created using CSS.

For Programmers and Designers

"How much can I theme this?"

We've open sourced the front-ends from Shattered Space and The Battle of Broken Mirrors (although we've pulled out the proprietary 3D models) so you can see some theming examples there. If you're into CSS you can inject whatever CSS you want, and if you're able to build 3D stuff in the browser you can find examples there of how we built interactive navigation screens with Three.js.

"What's all this stuff about Workers?"

In order to make it easier to run Promenade on lower spec devices, we use OffscreenCanvas and Web Workers for canvas operations. This also means we need a single-threaded polyfill for OffscreenCanvas, as well as webpack workflows to build those workers as separate scripts. Those two repos have a bunch of examples of this pattern, if you're inclined to venture down this dark path.

"The producer keeps asking me 'What's the bill?', is this thing cheap?"

This bad boy's gonna be dirt cheap to run, we're talkin t3a.micro's and yes even t4g.micro's 'cause these Docker containers are built for deployment on both architectures. If you make a new AWS account for your theatre company you can get on the AWS Free Tier for 12 months, and if you already have an account then t4g.micros are Free Tier for everyone until March 2021. Just make sure to shut down the VMs using the sleep mode script when you're not using them and you could be looking at less than a hundred bucks a month of server costs.

For the ending of Shattered Space, we livestreamed a performance by an ARKit-controlled digital character. If you want to do something like this, contact me at [email protected] and I can walk you through how it works.

Send us an email at [email protected] and we'll try to help you out!